On 22nd of May 2013 , several hours into my birthday, dearest called to say he wanted to take me to dinner. I lamented in my mind, I didn't want to go for dinner, I already told dearest a night before that my girls wanted to take me out even that,  I was trying to bargain with them to move it to the weekend. Dearest didn't care and said I could invite my friends to join us for drinks after we had had our dinner. My friends didn't object to dearest's suggestion though I was a bit reluctant to go out after having such a long but happy day with all my family who all came to hang out with me at work.
I headed to Façade where dearest said we would be having dinner. I was met right by my car by him himself apologizing for not sending my cake to work. We entered through the door and were welcomed by a waiter who led us to our seat, dearest chose our seats, not long after we were given a menu.

The waiter who was manning our table wasn't that experienced though he tried his best to give us good service, it was obvious that he was struggling (probably his first job  as a waiter) dearest asked if I'd like a bottle of champagne, I said Yes because it was my birthday  (on a normal day, I would have probably said No on an ordinary day and ask for a glass) I knew it would be impossible to finish the bottle on our own before my friends arrived, but we were celebrating so it was cool. After the champagne was brought, the waiter came back to tell us that the champagne was more expensive than the price that was printed on the menu, dearest made a few comments very unlike him not to question further or to say he didn't want it any more. He asked the waiter to open it.

There was nice music playing in the background, the ambiance was perfect. Our food arrived, it was actually very nice, though the portions were quite small. I remember that  before we placed our  order for food, we asked the waiter what a particular meal on the menu was, he was unable to tell us. I like to go to restaurants where waiters are familiar with their menus.

Anyway not long after we finished our food, dearest received a phone call,  he said the cake was downstairs he wanted to go get it. I waited patiently until I saw the waiter carrying my cake with a sparkler on it and dearest behind him, I got very excited, the cake was placed in front of me and I took pictures away, dearest asked if I liked the cake, I told him that  it was beautiful and the fact that it was pink made it more magical, he asked me to take a closer picture of it only then did I notice that the cake didn't only read "happy birthday' but "will you marry me" I screamedddd and almost fell to the floor, my scream brought me more surprises because my family, friends, and dearest's friends all started appearing! I was so shocked, apparently they had all been waiting downstairs waiting to make a surprise appearance. 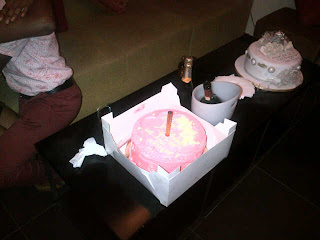 Dearest had invited them all earlier asking them to keep the invite a surprise without telling them he was going to propose. So he got on one knee and asked me to marry him. I was so excited I didn't even remember to say yes lolll. So he asked after a few minutes of kneeling "did you say yes baby"  then I finally said "yesssss"

It was marvellous. I was so so proud of my darling dearest. Everyone came and looked at the ring and congratulated us. It was the best birthday ever.

The staff at Façade were excellent, I only wished our waiter was more educated on the menu and I didn't like that the champagne price on the menu wasn't the same as what was charged. Their food tasted very nice. nice place, nice ambiance.