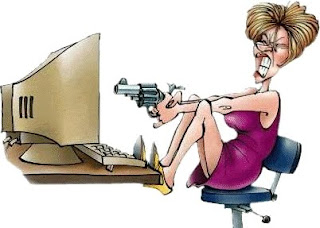 As i sat in my room on this particular night, i was almost cursing my internet service provider namely Starcomms. i sat in front of my laptop and began to wonder why i was still on this Starcomms issue. I honestly should have dumped them a long time ago.
I sat there wishing i had their CEO’s number so i could give him a piece of my mind and also ask him how things got this bad, since their sales reps don’t do a good job of representing them or delivering my distress messages.

Paying N15,950 as monthly subscription fee excluding the transport fare of the man who goes to the bank to pay this fee is not a joke. I felt cheated and frustrated.
I need to give an explanation of what went wrong that night...

I got home from work; connected to my internet to send an urgent email to my friend in America who was sitting in front of her computer waiting to receive this vital document from me. The only headache i had apart from being tired already was that my internet would not allow my message send. My friend kept pinging my blackberry refusing to understand why it should take so long to send one email(which of course added to my headache and frustration). Though the internet claimed it was connected the email refused to send. I couldn’t use my blackberry to send the email because the document i needed to attach to the email was on my laptop. I tried sending this email for a couple of hours like 2, 3, 4hours, dozing off and waking up until finally at midnight the message sent, “Hallelujah” i shouted. By that time i didn’t know what i felt, but i knew i was angry at myself (as usual...this happens every time) for being such a loyal customer to Starcomms.

Though renewing my monthly subscription didn’t make that much sense because the internet hardly worked but i kept having faith that the service will get better thereby throwing money away , unfortunately it only got worse.

In this new age where many internet providers have sprung up, i wonder what a company like Starcomms that has been in the telecommunications industry (in fact one of the very first internet service providers) for so long is doing messing about in the same industry they pioneered.

Try calling their customer service line; they have never for once had a solution to any single one of my problems. But as soon as they notice that you haven’t paid your monthly subscription fee, they call your phone asking politely why you haven’t. They go ahead to encourage you to pay because they have rectified all the problems your internet might have (Big lie!!!) which is just a gimmick to make you pay for another month of frustrating internet service..

Not long after this incident, as you would imagine, i ditched Starcomms for a more sensible internet service provider that provides me with a better, faster and even cheaper service, GLO 3G internet.

Sometimes you lose by being too loyal a customer..
Posted by Spynaija at 12:09 PM